Recent Posts
Swipe to the right

An Interview With The Artists Behind Jones Graphics 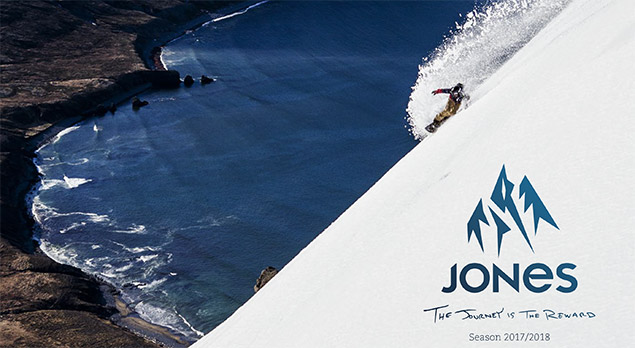 Jones snowboards have always had a strong affinity with nature; designing and making boards that excel in the backcountry, being an active member of POW (Protect Our Winters) and using eco-friendly and recycled materials in their construction. This theme continues throughout the graphics you find on their boards, with the consistent theme of mountains and see-through topsheets showcasing the natural wood core.

We were lucky enough to get a chance to talk to two of their UK-based artists (RP Roberts - 'Rich' and Stuart Leonard - 'Stu') who have created several of their graphics.

Rich:
I was introduced to the UK snowboard scene before I even snowboarded. My best friend's older brother 'Sos' used to run the British Snowboard Association in the mid 90's and was also the distributor for K2, Smith and now defunct clothing brands ‘Twist' and ‘Titan' - therefore there were always team riders in town.

My first trip away riding was to Chamonix. At the time there were a load of Brits doing a season over there. I love the Chamonix valley, but it's probably not the best place to learn to ride though!

From then we used to jump in with Sos when he used to take K2 gear to board tests in the late 90's, always fun road trips.

Stu:
To cut a long story shortish, it was back in the winter of 95/96 I think. I was at college doing an HND in Graphic Design it had snowed, and a friend rocked up at college with a homemade snowboard in his car and was like ‘you wanna play?' Silly question! So 3 of us slid down some small hills around Redditch all day and well into the night.

The following day we went to college and made a couple more crude snowboards, cutting them out on a band saw and nailing some bits in to stop our feet moving too much. We travelled to Broadway and rode all day down what seemed at the time, big hills. I was hooked, those two days changed the course of my life.

After that, I found out about the Tamworth Snowdome, and the rest is history as they say.

“It's a very long process from the initial sketch and concept, to the production, so when you see it completed it's a great buzz. It's even crazier if you see someone you don't know riding one on the mountain. An amazing feeling.” Rich

Rich:
I started painting a few mountain scenes as backgrounds for graffiti pieces - I think the first time was about seven or eight years ago. From then I started to paint landscapes on their own, they got a great response when I posted them online, so I ended up focusing my work on the alpine landscapes.

I set up new online profiles to push just the landscapes, and after a good response and some interactions online, the design guys from Jones got in touch and asked if I wanted to submit a painting for a board graphic. It ended up being four graphics for the 16/17 season.

Stu:
That's a funny one, as it wasn't until I started working as an instructor at the Dome around 06 that I actually started painting and drawing again. I played with mountains and snowboarders, painting for the enjoyment of rediscovering something I'd not done since college. Little realising where it would lead me some 10 years later.

Stu adding the finishing touches to one of his pieces

Rich:
My background is graffiti, so it always used to use quite bright, vibrant colours. As far as getting inspiration, being connected to a lot of people online and seeing their shots from touring and riding the backcountry - that always gets my mind racing. I get asked to paint a lot of private commissions, so I'm always searching for reference online.

Luckily though, Manchester is close to the Peak District, the Lakes and of course Snowdonia, so if I need a real mountain fix, it's not too far to head off for the weekend and go for a hike. 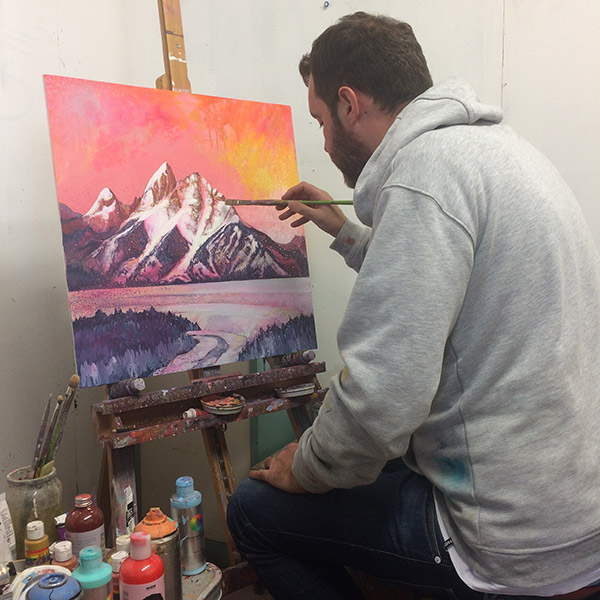 Rich:
Very much so, there are a lot of factors to consider. I have to make sure the graphic works when it's on the shelf, but still works when you have bindings attached. So, it's important to avoid painting important elements around the inserts.
If it's a reflected twin graphic, how to work on the 'join' of the reflected pieces in the middle of the board. You also have considerations of where logos and branding will sit.

And most importantly, the guys at Jones use a really nice topsheet finish on the Twin and Twin Sister, where the wood core is visible through certain colours and tones. Taking the topsheet finish into consideration - I had to put way more contrast than I normally would, so there was a level of balance once it was produced.

Stu:
My first snowboard graphic was a trade with a guy who makes snowboards. A painting for a snowboard with my graphic on if I wished, which was great. Sometimes, I played with a painting I'd done and applied it to make I into a graphic I liked. Which was great, as it was just for kicks.

Stepping up for Jones there was a lot more involved in the process; thinking and planning before I even got down to any painting.

Essentially though for me - I'd say no; I work out what I like, what interests me and paint it. 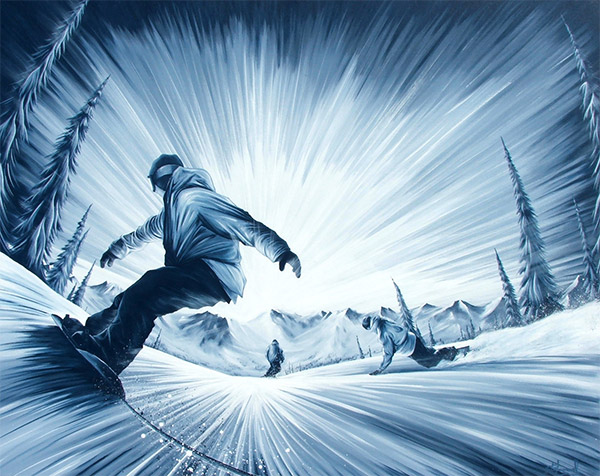 One of Stu's favourite pieces - snowboarding with friends

Rich:
I first started the conversation with them in 2015, after I was contacted by them on Instagram. I've been working with them on board graphics, shirt designs and even carton graphics. They are a great team to work with.

Stu:
They found me on Instagram and were like ‘would you?'. Well, what snowboarding artist or designer wouldn't. That was early 2016 for the 17/18 season.

“I wasn't really running the clock you know; it was long days, nights and weekends spent in my little studio painting. If you did total it all up, I'm guessing the whole project took a good month to six weeks.

Rich:
We initially discussed which of my painting styles they liked, then chatted about the content.

They wanted to look at specific peaks or areas that were prominent in the Jones story; for instance, the mountains that Jeremy had ridden. There was then a period of research working out which peaks, and what vantage points would work for a long graphic. I then made quick sketches for layouts before getting the go-ahead to paint the pieces.

They have been fantastic every step of the way, from brief to completion and beyond. They supplied pieces and elements of my paintings that they liked and would like me to draw upon, which was helpful. A wealth of images from some fantastic photographers to get the juices going.

In general, the guidance, support and free rein to go and do your thing has been great.

Rich:
So, the Mountain Twin and Ultra Mountain Twin are created from the same painting. I spoke to Jeremy about which peaks he would like represented on these boards - after we went for such an iconic European peak last season (Matterhorn). We decided to go for an Alaskan peak, Pontoon. It's a very recognisable silhouette, and it's from an area of Alaska that Jeremy has explored, so it was a great fit.

For the Twin Sister, we also wanted to go down the route of creating a painting based on the jagged and extreme faces and spines of Alaska. I searched through a lot of shots from Jeremy's archive of shots and came up with an extreme looking range that would work well as a reflected graphic.

For the Dreamcatcher we wanted to go for an iconic mountain, again we searched through a load of photos. I found a great shot of Denali that had some depth and an interesting 'face'. I use a lot of spray and drips in my paintings, so I decided to run the drips and textures out through the trees near the bottom of the painting.

The painting used for this year's Twin Sister

Stu:
The inspiration for the Explorer was one of several aerial photographs of Alaska I liked; I selected some areas of interest to me and played.

In total, I painted four preliminary 32x40” canvases; so pretty big each with two ideas on – that's eight ideas for three boards. Some of those ideas came back, and I went and painted the final piece for the Explorer.

I wasn't really running the clock you know; it was long days, nights and weekends spent in my little studio painting. If you did total it all up, I'm guessing the whole project took a good month to six weeks.

Rich:
It's pretty crazy! I think the graphics of skate and snowboards were the first thing that drew my attention to board sports, so to have my artwork on a board is amazing.

It's a very long process from the initial sketch and concept, to the production, so when you see it completed it's a great buzz. It's even crazier if you see someone you don't know riding one on the mountain. An amazing feeling.

Stu:
It was a moment for sure; you see photos and stuff and your like, yeah it's kinda real - this happened you know. Then being able to show it after it being a secret for so long is great.

It wasn't until I was at TSA in the snow dome the day before the Big Bang that I got to hold and check it out for real. For me, that was like ‘the moment', like the moment I stood on a board for the first time and the moments you have on the hill from time to time that make you shed a tear of joy; yup one of those moments. Also a time of reflection as in looking back at those two days (when I first went snowboarding) some twenty plus years ago and ‘connect the dots' to quote a little Steve Jobs.

To see more of these artists' work - check out their Instagram and websites: